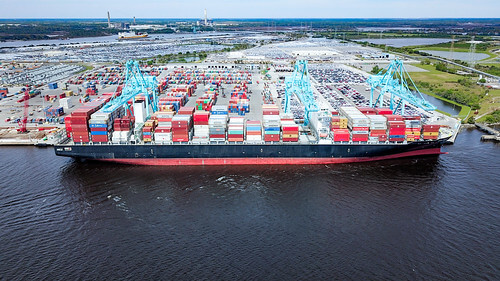 Port of Jacksonville is building for the future

Compared to most ports in the United States – particularly the ports along the Eastern Seaboard – the Jacksonville Port Authority (JAXPORT) is a relatively new entity. It was created by a special act of the Florida Legislature in 1963 to develop, maintain and market Jacksonville’s port facilities.

However, the port area itself is hundreds of years old. In 1565 English sailors traded guns and ammunition to the French from Fort Caroline for food and a boat. This is considered the first international commerce recorded in the New World. Therefore, the port uses the phrase “Jacksonville: America’s First Port.” Originally named Cowford, the city was renamed Jacksonville. On June 15, 1822, a petition from the city was sent to U.S. Secretary of State John Quincy Adams, asking him to designate the city as a U.S. port of entry.

The Port of Jacksonville is an international trade seaport located on the St. Johns River. It is the 14th-largest container port in the United States. About 18 million short tons of cargo passes through the port annually, and the port’s annual economic impact is over $31 billion. More than 138,500 jobs across Florida are related to cargo moving through JAXPORT. In 2019 the port handled 1.338 million containers, and is the second-largest U.S. port for vehicle imports (nearly 700,000 in 2019). JAXPORT is Florida’s largest container port complex and one of the nation’s busiest vehicle-handling ports.

JAXPORT is the independent government agency that “owns, operates and controls much of Jacksonville’s Seaport System, including (but not limited to): docks and wharfs, cranes, a passenger cruise terminal, warehouses, paved open storage areas, and road connections to the public highway system. JAXPORT maintains these facilities and manages their overall use.” Private companies pay JAXPORT lease and rental fees to operate from the seaport. The revenue from the fees funds the day-to-day operations; no public tax dollars are required.

JAXPORT and its partners invested more than $1.8 billion in terminals, equipment and access. Over the next five years the plan is to invest an additional $1.3 billion in improvements.

A berthed containership being served by three of JAXPORT’s cranes. (Photo: JAXPORT)

The St. Johns River is one of the best natural seaports in the Southeast; therefore shipping has been an important component of the local economy since the city was founded. Cotton and timber were traded and shipped from the port before Florida became a state in 1845. The Great Fire of 1901 destroyed the port facilities as well as most of the city. Docks and wharfs were among the first items rebuilt by businesses. In 1907, the federal government helped pay to dredge the river’s main channel to a depth of 24 feet. The city of Jacksonville began to control the 160-acre port at Talleyrand in 1912; a $1.5 million bond referendum was passed in 1913 to pay for construction of municipal docking facilities. The U.S. Army Corps of Engineers dredged the harbor in 1916 (30 feet), 1952 (34 feet), 1978 (38 feet) and 2003 (41 feet).

There were no United States Navy bases at the Port of Jacksonville until shortly before World War II. Two facilities were constructed at that time. Today, the third-largest military presence in the United States is located in or near the Port of Jacksonville. Facilities include Naval Station Mayport, Naval Air Station Jacksonville, Blount Island Command (U.S. Marine Corps) and nearby Naval Submarine Base Kings Bay (in Glynn County, Georgia). In addition, the U.S. Army’s 832nd Transportation Battalion is based at JAXPORT’s Blount Island Marine Terminal. 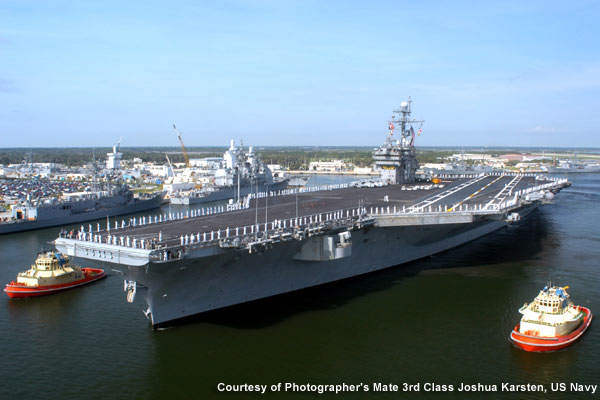 JAXPORT is one of 17 U.S. Strategic Seaports on-call to move military cargo for national defense, foreign humanitarian assistance and disaster relief. It is the only port in Florida with this designation.

In addition to the port’s military bases, Jacksonville’s harbor includes more than 20 maritime facilities. These are privately owned and operated, and include drydocks and petroleum terminals.

Unfortunately, following World War II, very little was spent on the upkeep or expansion of the port’s public docks. They deteriorated until many were unusable. Therefore, Jacksonville missed most of the post-World War II shipping boom. Blount Island is 9 nautical miles from the St. Johns River flows into the Atlantic Ocean and is one of the largest vehicle import/export centers in the nation. Blount Island has one mile of continuous berthing, which is among the largest on the East Coast, as well as low berth congestion. The island has 75 acres of secure cargo area to store and stage equipment. The public Blount Island Marine Terminal, which is JAXPORT’s largest container facility, occupies 754 acres on the western side of Blount Island. It is also capable of processing roll-on/roll-off cargo, heavy lift, breakbulk and liquid bulk cargoes on 6,600 feet of berths with deep water (41 feet). Blount Island offers easy access to major highways. It is located less than one mile from I-295 and is only minutes from I-95 and I-10. 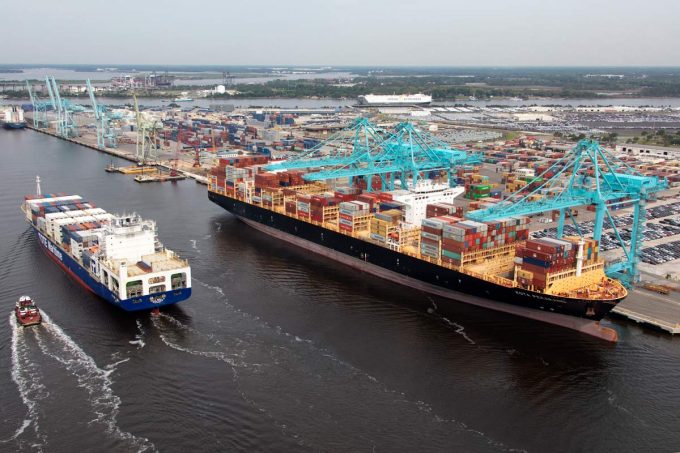 An aerial view of some of Blount Island’s facilities. (Photo: JAXPORT)

The U.S. Marine Corps utilizes 1,100 acres on the eastern side of the island for Maritime Prepositioning Force operations. The island’s on-dock rail facilities, which are served by CSX, provide efficient movement of military cargo.

The oldest of JAXPORT’s marine facilities is the Talleyrand Marine Terminal, which is located 21 nautical miles from the Atlantic Ocean. The 173-acre facility handles imported autos, liquid bulk commodities, break bulk cargo and containerized cargo. Talleyrand has six container cranes, on-dock rail service and a 160,000-square foot transit shed. The terminal can process frozen, refrigerated or ambient cargo on 4,780 feet of deepwater (38 feet) berthing space. In addition, there is a 500,000-square foot warehouse available to store a variety of cargoes.

JAXPORT’s newest facility is the nearly 600-acre Dames Point Marine Terminal. It is located one mile upstream from Blount Island on the main shipping channel. Dames Point is home to the 158-acre TraPac Container Terminal, which is utilized by Mitsui O.S.K. Lines. Hanjin Shipping had reserved 90 acres for a $300 million container terminal, but the project was cancelled in 2013. 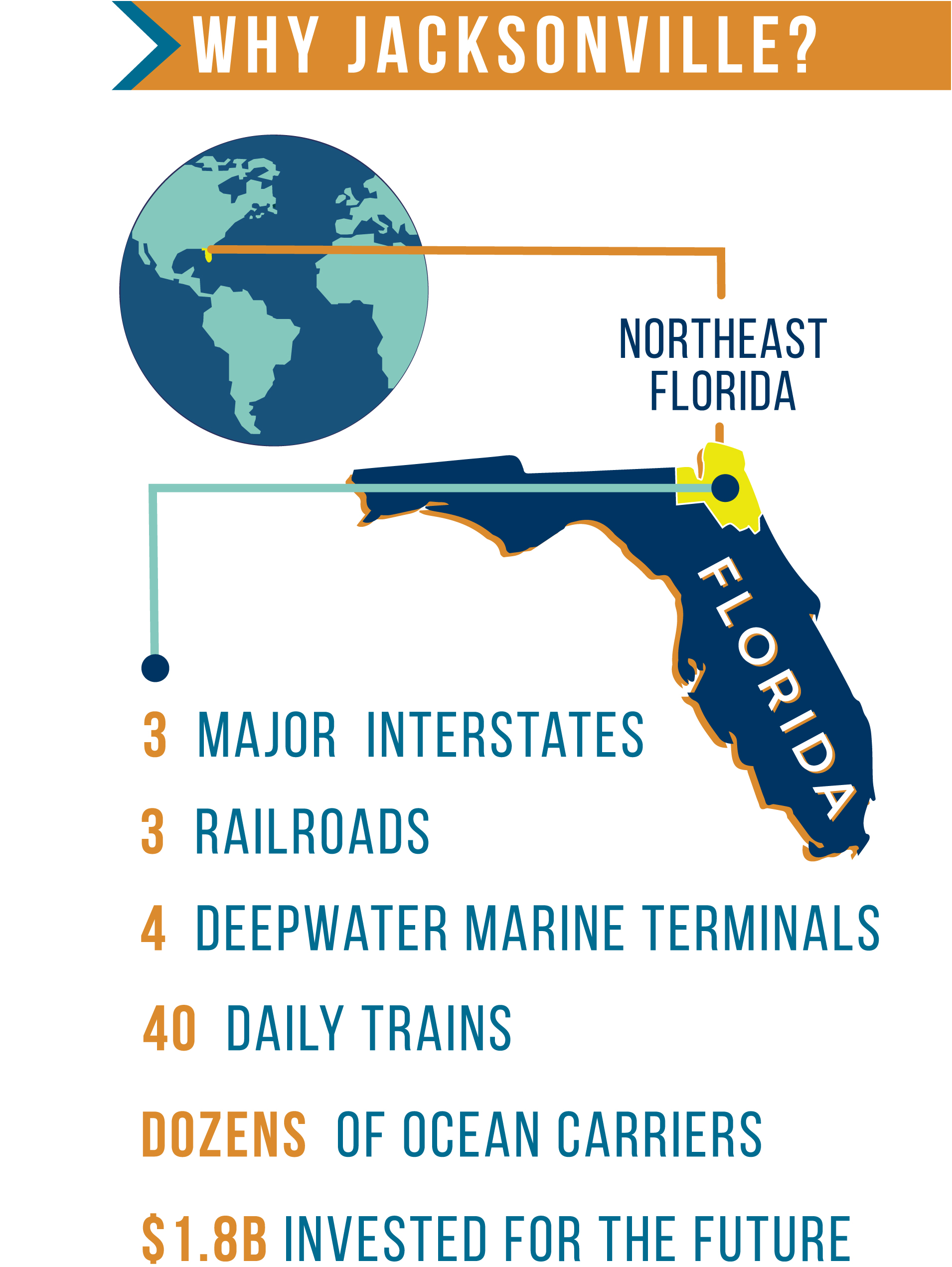 A JAXPORT infographic provides good reasons to use the port and its facilities. (Image: JAXPORT)

The port’s 2014-2019 strategic plan focused on infrastructure. The 2020-2025 plan focuses on building the port’s cargo business and creating new private-sector jobs. Highlights of the plan’s key goals include:

Jacksonville’s harbor is being deepened to 47 feet; that is scheduled to be completed in 2022. Related crane and berth infrastructure is also scheduled to be in place to accommodate larger container ships. The port seeks to expand its container business, focusing on Trans-Pacific and Trans-Atlantic services, while also building its business with Puerto Rico.

As noted above, the port is the second-largest center for vehicles imported into the U.S. The port will provide additional acreage for vehicle imports and maintain congestion-free berths.

New automobiles disembark from the ship that brought them thousands of miles. (Photo: JAXPORT)

JAXPORT plans to build additional warehouse space for breakbulk and bulk products. This should generate additional business from these categories, which will help maintain the port’s diversified revenue stream.

Nearly all of JAXPORT’s current property is under long-term leases. The Authority plans to acquire waterfront and/or near waterfront property to accommodate growing demand.

The plan’s other goals include: complete the deepening of the harbor; generate revenue from all owned properties; rebuild the port’s cruise business; invest in technology that improves port operations’ efficiency; and prioritize investments in infrastructure, equipment and facilities.

The Port of Jacksonville provides berthing for cargo and cruise ships while also being the home of multiple U.S. armed forces facilities. It has been in operation for many years; FreightWaves Classics wishes it many more years.