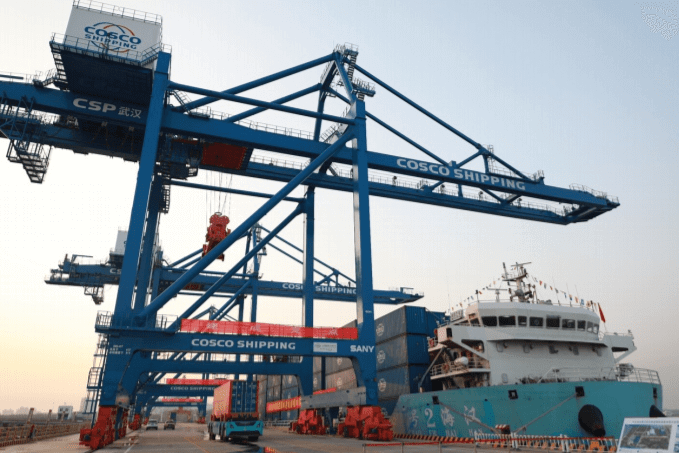 On the day of the event, the new “COSCO SHIPPING Blue” cranes lined up and the 1,140TEU vessel Han Hai No.2 docked at No. 3 berth in the terminal operation area, fully loaded with cargo, while driverless container vehicle (DCV) made a debut. Additionally, the first batch of containers assembled in the terminal railway operation area.

In the railway operation area of the terminal, a freight train with 50 containers headed to destination from the “Wuhan Port Station”, where water transportation and railway transportation were seamlessly connected. The whole process was completed in one go, according to a statement, as the port became automated and intelligent from horizontal transport to vertical loading and unloading.

The integrated layout of port and rail station, one-stop transportation, customs inspection and information sharing at the same yard developed by the project also demonstrated that CSP Wuhan Terminal has opened a new chapter of “water-rail intermodal transport” along the Yangtze River, which has built a modern logistics hub for the collection and distribution of containers, making it more determined and capable of transforming and upgrading the ports along the Yangtze River towards smart and green new ports, according to a CSP announcement.

Xu Lirong, Party Secretary and Chairman of China COSCO SHIPPING Corporation, said that the project is a major achievement of the deepening of strategic cooperation between Wuhan City, Hubei Province and COSCO SHIPPING Group and is also a major move of the Group to deepen the “Yangtze River Strategy”.

“We will increase the investment in port and shipping logistics resources in Hubei Province and Wuhan City, cooperate with Hubei Port Group, SIPG and other partners to help Wuhan build a central hub and regional shipping center, and contribute to accelerating to build our country as a strong power in maritime and shipping fields,” added Xu Lirong.