According to the latest port data secured by Container News, the pace of Indian containerised trade flows has begun to slow down after recording strong growth last fiscal year.

Further, the number of container ship visits to Nhava Sheva in September shrank to 194 from 203 calls in August.

Nhava Sheva has five container-handling facilities, while work on a 2.4 million TEU capacity expansion is underway.

“Indian ports witnessed a drop in demand from the onset of the monsoon,” said Sanjay Bhatia, co-founder and CEO of digital forwarder Freightwalla, adding that “Container volumes are dropping at the top significant ports globally.”

Bhatia also noted, “As we understand, there was a 4% decline in the volume witnessed at ports. We noticed demand was not as high as expected in the first quarter regarding growth, and the same was seen for the most part in the second quarter.”

He went on to add, “However, major shipping lines speculate that a peak season may be underway, and it is too soon to declare a trade slowdown.”

The value of Indian merchandise exports in September stood at US$33.81 billion, down 3.5% year-over-year, according to new government data.

“The slowdown in exports is a reflection of the toughening conditions of the global trade facing demand slowdown on account of high inventories, rising inflation, economies entering recession, high volatility in currencies and geopolitical tensions,” said A Sakthivel, president of the Federation of Indian Export Organisations (FIEO), said in a statement.

He further said, “While we should not draw solace from the fact that exports of most of the economies are facing contraction, but this is a stark reality. And the coming few months would be quite challenging unless the geopolitical situation improves drastically.”

Indian ports reported all-time high container volumes in the fiscal year 2021-22 – hitting combined throughput of 19.5 million TEUs out of countrywide major/minor ports, a gain of 13% over the previous year. 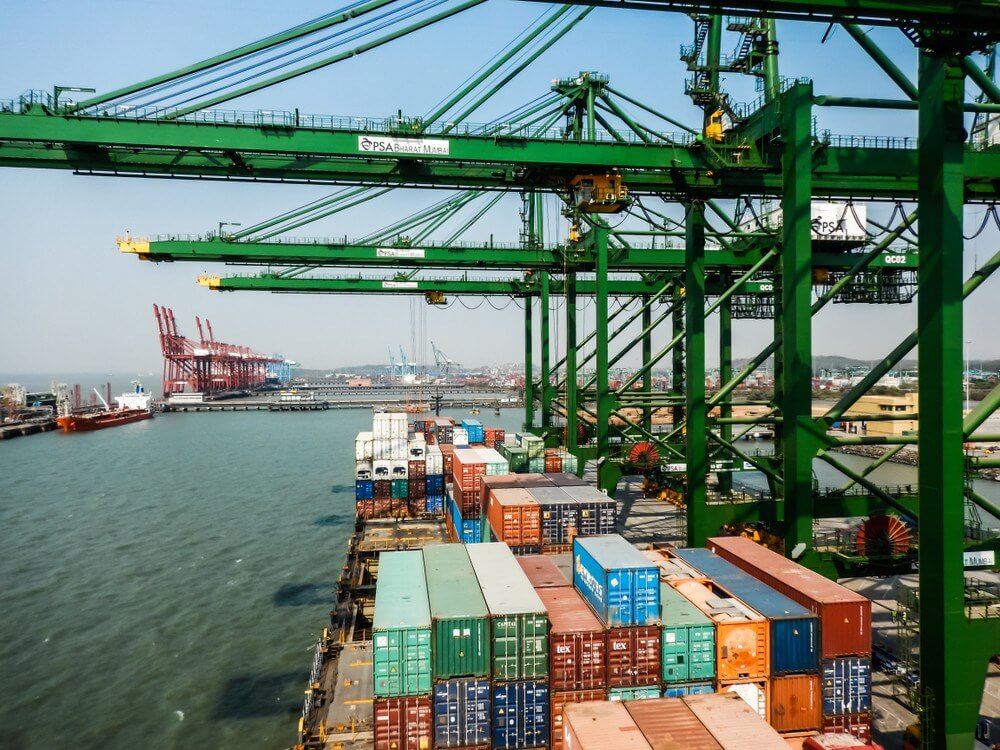 Traffic restrictions cause congestion concerns for carriers at Nhava Sheva

Maersk Line has reported a slowdown in truck flows in/out of India’s Nhava Sheva Port/JNPT as a result of new traffic restrictions imposed by local authorities.

“Traffic Police have issued a notice on movements of heavy vehicles from Nhava Sheva CFS [container freight station]/yard,” the carrier said in a customer advisory. “Heavy vehicle movement from JNPT area is, therefore, leading to traffic congestion. All these restrictions are beyond our control and this may lead to delays.”

The carrier has called on cargo interests to plan their shipments in advance to avert cargo gate-in delays/roll-overs.

Historically, the bulk of containerised freight passing through terminals in Nhava Sheva is handled by road.

The port saw its highest monthly volume in the current fiscal year last month, handling some 503,500 TEU, up 16% year over year, according to the latest data.

PSA has also added final-mile delivery service to the designated warehouse under this arrangement, contracted on a merchant haulage basis, versus liner haulage at Mundra.

According to port sources, average transit times from Nhava Sheva to North India are pegged at two days, versus four days from Mundra.

With a round-trip solution, sources noted that importers have an opportunity to reposition empty boxes back to storage yards in Nhava Sheva. This type of cargo is generally handled through direct port delivery (DPD) bookings, a fast-track clearance mode meant to improve dwell time levels.

“It’s a long-term business and a sustainable solution for the major newsprint importer,” an official told Container News. “We are also in discussions with other newsprint customers.”