The coasts of South Africa lie on the Southern end of the continent’s landmass. The country touches the Indian Ocean on its east and the South Atlantic on its West coast. This allows cargo and cruise vessels of all sizes to have 3-way access to the South African coasts. The major ports in South Africa line up along the 1,739 miles long coastline.

As of 2019, the country has over 8856 port calls that include ships of all sizes. Major credit to this goes to the mineral-rich diversity of the country. Moreover, South Africa’s developing economy also means that bunker and fuel oil resources are significantly cheaper. Hence, long route Ore Carriers, VLCCs, and other vessels often find South Africa as a suitable bunker port.

The major ports contribute 92% of its 30,400 million dollar shipping trade. These ports export mainly to China, Germany, and the USA.

Let us review the 7 major ports in South Africa, their impact on the shipping landscape, location, operational information, and cargo attributes.

The port of Durban has the highest vessel traffic in entire Africa. It also is the largest port facility in South Africa. This harborwas setup in 1824 under the British colonial identity. About 60% of the total shipping revenue of South Africa comes from the Durban Port Facility. The facility occupies Durban Bay, extending over 18.5 sq. km with 8.9 sq km of high-tide waterfront. Moreover, this port also handles 60% of the total container cargo shipping load of South Africa. 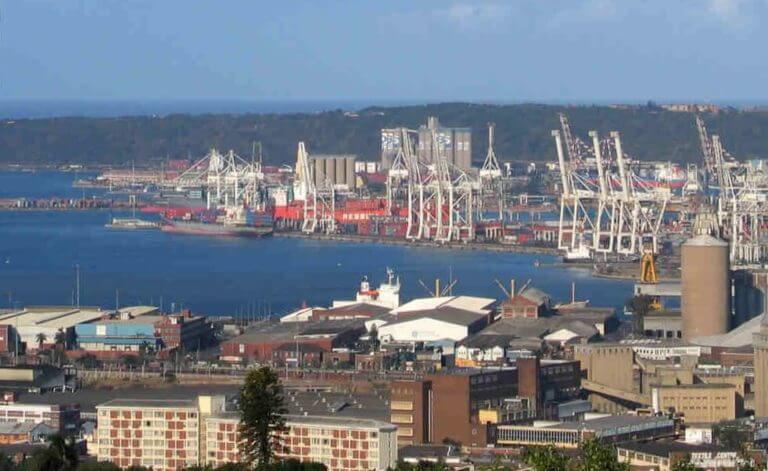 A collection of more than 58 berths handles container, dry bulk, and liquid cargo throughout the year. The facility operates vessels with DWT up to 2,30,000. Additionally, , their massive outer anchorage allows cargo lightening for vessels with heavier DWT. Ore carriers with a 300m+ length and a beam of 35m+ can easily ply alongside the facility. In 2019, the port recorded 3253 vessels (sea-going) calls with a cargo volume of 81.21 million MT. The volume is the largest amongst the major ports in South Africa by a significant margin.

A large container inflow needs precise loading and handling facilities round the clock. The Durban port connects with more than 302 kilometres of railway network for transfers. The facility also holds two floating cranes with 23 MT and higher handling limits for off-shore handling. The network has 5 sections with the Durban car terminal, the container terminal, and the multipurpose terminal being the busiest. This facility operates with 1900 permanent employees and a total handling strength of 3000+.

The establishment of Richards Bay in 1972 started with the Parliament’s approval for commercial harbour operations. The facility has 2.76 sq. kilometres of land area and 6 berths for sea-going vessels of all sizes. The port facilitates coal cargo operations and is one of the largest African ports to do so. In terms of gross volume, Richards Bay handles 55% of cargo amongst the major ports in South Africa. The facility easily welcomes large vessels with channel draught varying between 17.5 to 19.5 meters. 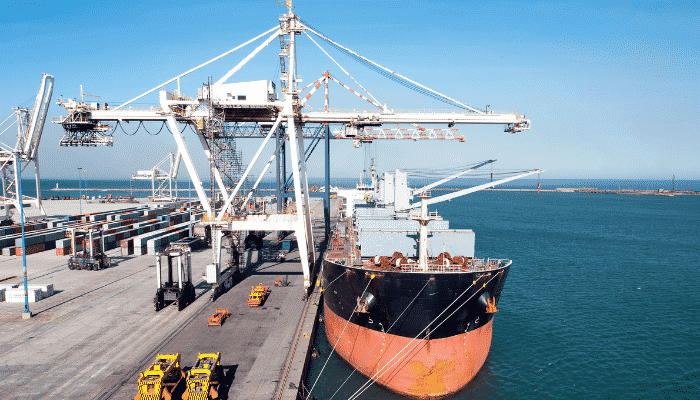 5 out of 6 berths specifically handle Coal as their primary cargo throughout the year. Moreover, vessels with 350+ meters length (VLOC) berth across the terminals for liquid and dry cargo. Richard Bay’s annual cargo handling reaches up to 80 million MT with coal occupying 2/3rd of the share. The commercial cargo operation for the year 2020 shows a high point of 92 million MT. Modern loading rates reflect a quantity of 50 to 65 thousand MT every day. The major sea-going vessels for these coal handling terminals fall in the 190,000 MT size range.

The coal terminal connects with the railway loading facility expanding over 80 km. The cargo coming in the facility loads through four loaders (8500-11000MT/H) present across the terminals. Meanwhile, internal shifting and departure need pilot assistance with the varying tides.

The first mention of Port Elizabeth along the South African sea coast dates back to 1427. However, the British establishment in the 1830s is the beginning of its harbour status. The cargo operations of true commercial value date back to the year 1927. Transnet emerges as the major operator for container terminals in this port facility.

The quay length for the container terminal is approximately 1 km spread across 3 container berths. Moreover, 6 berths for breakbulk handling and 2 for ore bulk are present under Port Elizabeth authority. 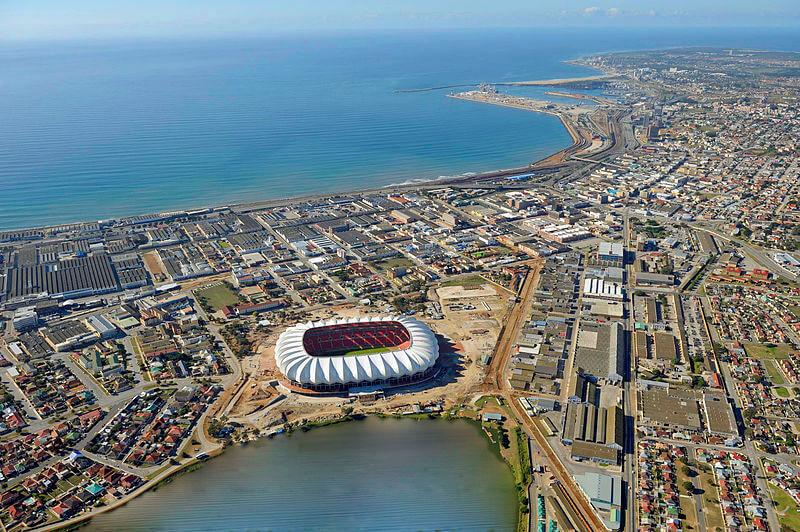 The terminal allows bulk vessels with 12.1 m of draught to enter safely. Additionally, the cargo lightning operations for the bigger vessels (VLOC) take place at the outer anchorage. The channel allows over 310 meters of width for large ore carriers and tankers to enter. In addition to the bulk and container handling, Port Elizabeth has a berth for liquid cargo operations. An average of 1050 vessels over 36 months reflect in the port’s records. This amounts to 11.2 to 12.5 million MT of cargo volume operations yearly.

The port utilizes railway and road transport for ore and breakbulk handling operations. Owing to its large size, the container handling capacity amounts to 375,000 containers. This comes with the port’s ability to handle standard containers over 5400 slots. Port Elizabeth also uses 2 ore berths and 1 liquid cargo berth for bunker operations. Manganese storage facilities, one of the few in the world, are present with a capacity of 350,000 MT.

The port of Cape Town has a land area of 2.53 sq. km and a waterfront of 9.5 sq. km. Its establishment dates back to 1652 with a big part of the contribution by the Dutch. However, the cargo port facilities date onward to the mid-1800s with the British colonial setup. The establishment has 34 berths, including the repair and smaller boat layovers. 6 container berths serve the large container vessels with sea-going draughts up to 15.9 meters. The harbour also has a waterfall attraction and sees thousands of fishing and pleasure boat calls annually. 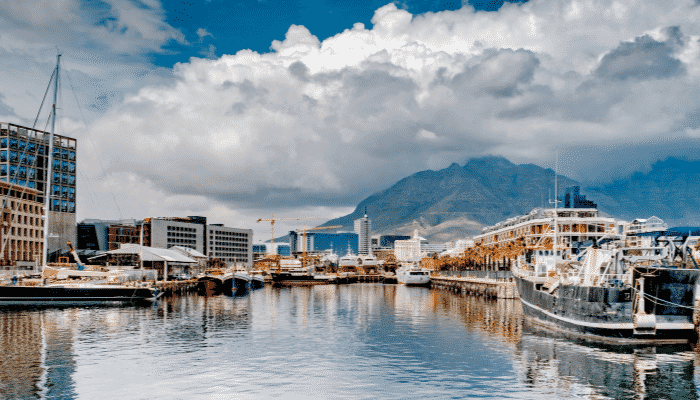 The port has a maximum of 24 MT handling capacity for road haulers and 22MT for cargo trains. This results in annual handling of 9.84 to 11.25 million MT of containers. Up to 2015, the port holds a record for 2520 vessel calls on average. However, a steep fall in the number due to port congestion show only 510 container terminal arrivals in 2020.

The port facility has grain centres for handling 28 thousand cubic meters of sensitive grain cargo. Meanwhile, repair and drydock yards with a length of 369 meters are available for the large vessels. Transnet also facilitates inter-port connections as the major stakeholder of this port facility. Over 1200 handling and operation staff work over 360 days a year for terminal operations.

The Port of Saldanha, commonly the “Saldanha Bay” is one of the fastest Iron Ore terminals alongside Portland. The terminal exists since 1976 with Iron Ore exports to Asia and the Middle East leading the operations. Its expanse is over an area of 19.3 sq. km with water depth up to 23.7 m far out. Like many other major ports in South Africa, Transnet is the major operator for Saldanha Bay too. The facility is a primary loading point for cape size bulk carriers and VLOC vessels. It operates with 2 Iron Ore and 1 Crude oil berths and 3 berths for MPT. The maximum berth length is 318.5 meters. 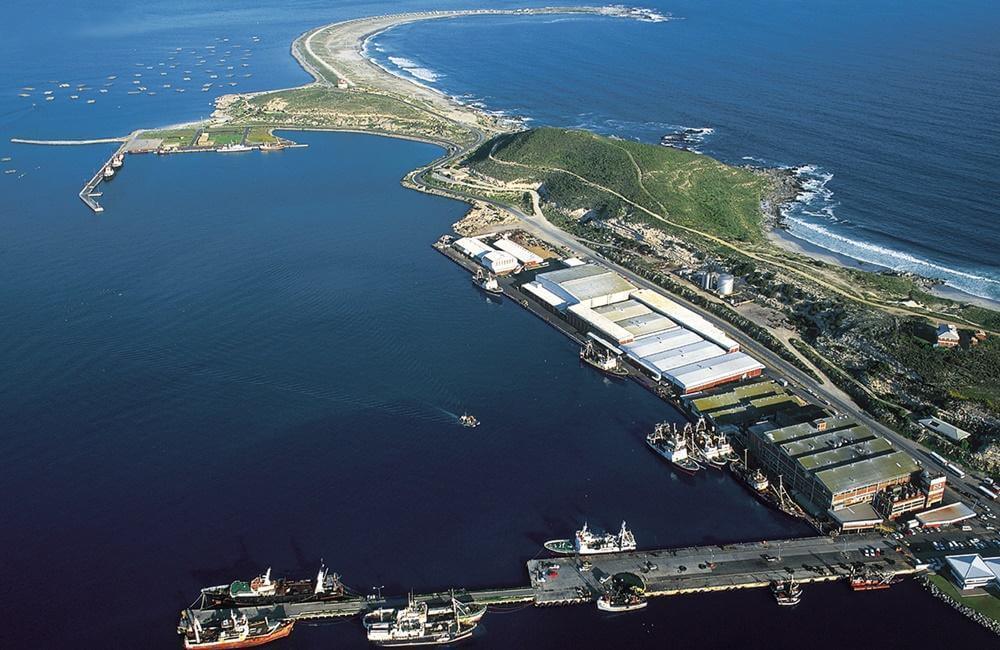 The port of Saldanha operates with a conveyor loading system of semi-automatic nature. The loading design features 3 hydraulic rams of 16” design and no crane operations. Annual cargo handling statistics of 60 million MT are common for the facility. Meanwhile, the port facility runs 365 days a year for iron ore handling. However, the capsize vessels are dealt with only during daylight hours.

The port of Saldanha employs over 670 people for routine cargo and port operations. An additional workforce of over 500 engages in the transport of cargo through trucks and smaller vessels. Transnet has an additional facility to connect major ports through roadways. An overall circumference of 91 km has railway tracks for cargo handling too. The Sishen-Saldanha line transports the ore from mines over a length of 861 km long tracks. The network is the spinal link between the mines at the Northern Cape to the port of Saldanha at the South.

The port of Coega is also commonly known by its new name- Port Ngqura. While the Coega facility exists since 1999, Ngqura (new container terminal) dates back to 2002. Ngqura is the newest and deepest terminal for container loading with the highest draft amongst South African ports.

The berth draft is 18 meters for container handling and 16.5 to 18 meters for general cargo. A total of 7 berths operates round the clock for yearly cargo operations. The facility is 20 km from the nearest neighbouring port of Port Elizabeth and compliments Richards Bay too. 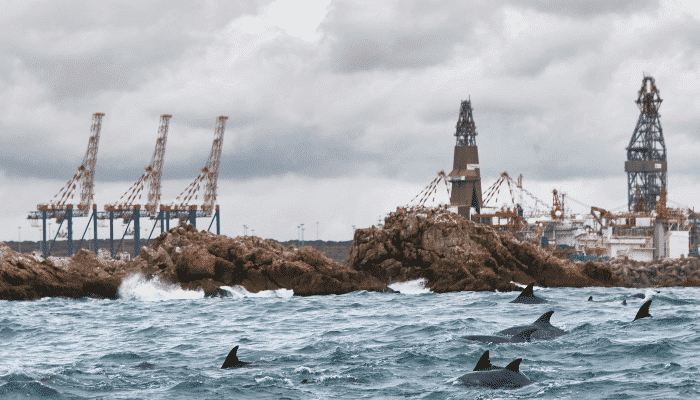 The first commercial container offloading operation in the port records is from 2009. Vessels with 12,500 TEU capacity are common berthing visitors at the container terminal. This terminal has an 18-meter datum and rounds off around the basin with 600 meters width. A 2 million TEU prospective handling capacity is possible as per port estimations. This facility aims to be the largest container terminal (by volume) amongst the major ports in South Africa.

The port network facilitates 1680 reefer points for temperature-sensitive cargo handling. This comes under the 60ha container handling facility with an expansion plan for a further 30ha. Including the general cargo and industrial phase, the facility is spread over a 120 sq. km area. Starting with 12, the Ngqura port facility has over 500 regular workers with expansion plans of 1500.

The port of East London is the solo river port amongst the major ports in South Africa. The coastal length of East Cape Province holds this facility at the Buffalo River. Formerly the Buffalo Harbour, this port dates back to 1836 under the colonial British setup for its start. A total of 12 berths (10 operational) for river vessels have alongside drafts between 9.1 to 10.4 meters. It consists of 3 containers, 2 general cargo, 3 ro-ro, 1 liquid, and 1 bulk loading terminal. The largest container berth operates with 90,000 TEU capacity per year. 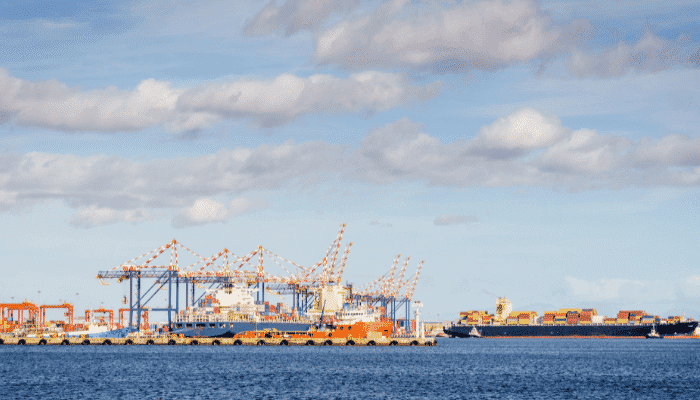 A major ro-ro traffic inflow comes with the Mercedes Benz factory set up nearby. This means the facility handles as many as 180 thousand vessels every year. East London port has the biggest conveyor handling facility in South Africa with a length of 388 meters It works for incoming and outgoing cargo. The handling facility plans to expand the vessel roll over to 360,000 with additional 7,000 bay numbers. Moreover, a diverse range of breakbulk, container and liquid cargo operations take place.

The port facility has an exclusive 8300 sq. meters of area for unit storage facilities. This allows them to handle a turnover of 125 vehicle units per hour. With the 8000MT per hour capacity of the conveyor, the annual grain volume network is over 2 million MT. A facility for loading vehicles for truck and rail transport is also available at East London port. It also employs over 180 cameras for automatic network monitoring and security features.

South Africa’s geographical location makes it the pivot of global shipping. The Cape of Good Hope and the coastal region marks the approximate centre of Cape size vessel routes. Pairing with its mineral-rich natural inheritance, the country of South Africa has a major shipping role worldwide. The major ports of South Africa have direct sea routes to South America, North America, and Asian ports. This makes South Africa the biggest shipping presence in the African region with almost 2/3rd cargo traffic.