In the past two years, since the Covid pandemic upended the entire shipping industry, a common refrain has been the all-pervasive lack of vessels to transport cargo available.

As the unprecedented congestion levels afflicting ports worldwide have absorbed all excess capacity, Container Carriers are desperately hunting for additional tonnage (vessels) to augment their fleets and cater to the demand for carriage of containerised cargo.

The combination of heightened demand and scant supply meant that all available container vessels commanded exceptionally high premiums, to the extent that Carriers were reportedly engaged in bidding wars for just about any available seaworthy vessel available in the charter market.

The inevitable impact was felt in the meteoric rise in charter rates, which (amongst other cost components) cascaded down to shippers in the form of higher freight rates.

Carriers who owned vessels were at a distinct advantage by virtue of their limited exposure to the vagaries of the charter market and high charter rates, besides the fact that owning tonnage meant that they could, at their discretion, deploy their vessels on the most profitable trade lanes, in an attempt to maximise profits in the current overheated freight rate environment.

On the other hand, Carriers who have typically relied on chartered tonnage found themselves scrambling to charter additional vessels and also paying significantly higher rates to ward off aggressive competition bids for renewing existing vessel charters.

Given the tremendous impact that this factor has exercised over the container shipping market, we will in this article, look at the relative merits and demerits of owning or chartering vessels, as well as Carrier strategies when it comes to evaluating whether to own or charter. 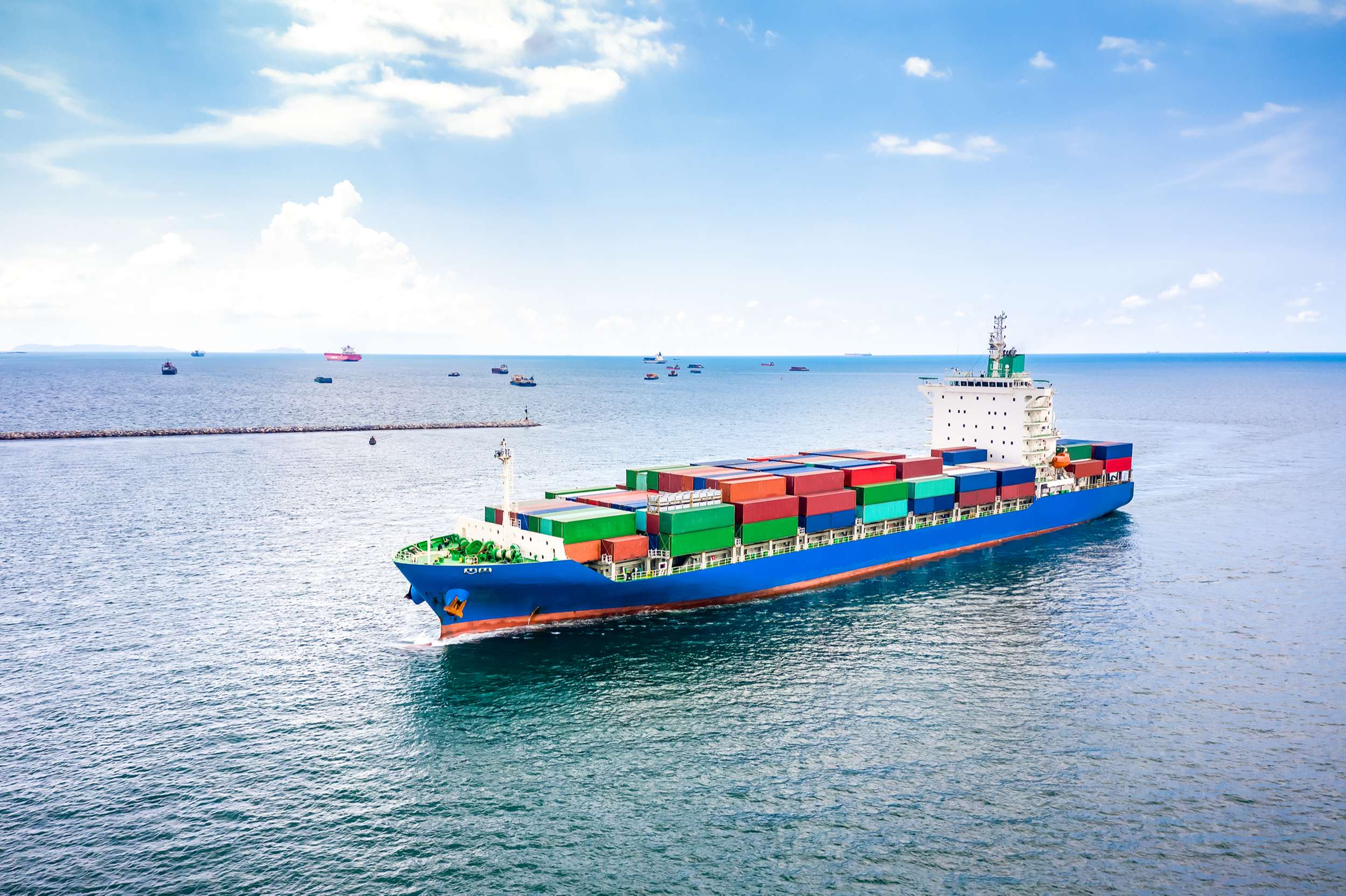 Generally speaking, in the shipping industry, charters can be broadly classified into two types, namely time charters and voyage charters. A very rudimentary differentiation between the two would be that while time charters are for a specific period, voyage charters – as the name implies – are for a specific voyage.
Given the nature of the container shipping business, where the whole concept is to provide fixed schedule sailings, on round-trip routes lasting a few days or weeks, where each vessel sails on a pre-decided port rotation and specified transit days, charters agreements in container shipping are almost inevitably time charters.

Container Carriers typically charter vessels for multi-year periods and thereafter plan their networks around this.

An interesting fact is that in the current market, which is heavily loaded in favour of vessel owners/ charterers, Carriers have been compelled to sign multi-year charter contracts, at rates which are higher than the historical average, thereby assuring vessel owners of a steady source of revenue and profitability over the next few years, thus effectively insulating them against any drop in charter rates should the market experience a downturn.

Given the vast number of routes that the international shipping trade is sub-divided into, Container Carriers of necessity have to invest in adequate tonnage to ensure they have a robust and diverse portfolio of products to serve all main (or their target) markets. The enormous costs of purchasing a vessel mean that Carriers find it expedient to develop their fleets using a mix of owned and chartered vessels, thus affording them the operational flexibility and commercial agility of owning vessels, combined with the lower expenditure in case of chartered vessels.

If we analyse the fleet ownership patterns of the top container carriers, it is evident that though every Carriers fleet comprises both owned and chartered vessels, some carriers have a markedly higher proportion of owned vessels while some carriers primarily rely on chartered tonnage.

In the former category are Carriers like Maersk (until recently the world’s largest container carrier, whereafter it was supplanted by MSC), who try to exert greater control over their operations in the bigger trade lanes by owning and deploying larger vessels.

For the secondary and tertiary/ intra- regional trades, where relatively smaller vessels predominate, Maersk relies on a mix of chartered and owned tonnage. At the beginning of 2022, Maersk and its affiliates and subsidiaries operated a fleet of approximately 730 vessels, of which 330 vessels were owned and the rest chartered.

At the other end of the spectrum are smaller carriers like ZIM Line who have chartered the bulk of their fleet. As per data shared by Statista, as of April 2022, ZIM operates 127 vessels, of which only 8 vessels are owned and 119 vessels are chartered.

This effectively means that ZIM Line’s operations are almost completely reliant on chartered tonnage (though it has in the recent past purchased second-hand vessels, resulting in a slightly increase in the proportion of owned tonnage).

Somewhere in between these two extremes lie most other carriers, such as MSC, CM-CGM, Hapag-Lloyd and ONE which charter more than half of their tonnage but also have invested considerable amounts in purchasing vessels (especially in recent years, where returns are high and chartering isn’t a feasible option, given that there are no vessels available in the market).

Of these remaining Carriers, MSC – the present largest container carrier – operates around 650 vessels, of which one-third in capacity was owned and the remaining two-thirds were on long term charters.

The choice of what is an appropriate mix depends on the Carriers size and scale, corporate objectives and growth strategy, financial wherewithal, and access to capital to finance the procurement of newbuilds.

Prior to Covid, smaller Carriers with weak balance sheets and modest cash flows attempted to monetise their assets by selling owned vessels to Ship Charterers (companies like Seaspan, Costamare, Global Ship Lease and Danaos, whose business involves purchasing and leasing vessels, rather than operating the vessels themselves) and thereafter leasing back the same vessels.

This helped Carriers improve their balance sheets by bolstering their cash flows from the sale of the vessel, while also ensuring that their overall capacity was not diminished.

Owning vessels – when appropriate and advantages and disadvantages

Owning vessels essentially is a trade-off between far higher investment and much greater operational control. Carriers who have the fiscal means and geographical scale have a greater penchant for owning a larger proportion of vessels than do smaller carriers.

The reason is that the owned tonnage enables the Carrier to redeploy vessels and revise schedules at its sole discretion, while also giving it greater control over matters like retrofitting or redesigning the vessel to expand carrying capacity or run on alternate fuel types.

Owning tonnage is especially advantageous in a bull market where Carriers would otherwise be compelled to pay exorbitant amounts to charter requisite tonnage, and even then run the risk of operational disruptions if they lose tonnage due to reasons ranging from failure to renew charters/ competitors paying more to secure available tonnage.

The advantages of Owning are:

2) Can customise the design and structure of the vessel – to meet tactical aims and strategic objectives. Examples include ordering vessels with higher reefer carrying capacity of the Carrier intends to ply those vessels on the reefer-heavy South America trades (such as Maersk Line ordering vessels of 7,450 TEU capacity, with 1,700 reefer plugs, which were intended for deployment on the traditionally reefer heavy North-South routes)

3) Can make structural changes as and when required to increase carrying capacity (beneficial in generating incremental revenue when freight rates are high) or use alternate fuels (environment-friendly, regulatory compliance and lower bunker costs)

5) Maintenance at its discretion, rather than just to adhere to the terms of the charter agreement

6) Continuity in service / can provide uninterrupted and reliable service, which in turn facilitates long-term planning

The disadvantages of Owning are:

1) Higher capital expenditure (and possibly interest burden, if the purchase has been financed via loans or debt)
2) Higher leverage, due to having to finance the purchase of ships (straining the balance sheet)
3) Provisions for depreciation and maintenance
4) Higher Fixed costs – to be incurred even when the markets are down and there is not sufficient cargo (unlike in chartering where the Carrier has the option of returning the vessel)

Chartering vessels – when appropriate and advantages and disadvantages

Normally, smaller carriers or companies foraying into the container shipping business or those introducing new services are the ones who prefer the option of chartering vessels. The most immediate advantage of chartering vessels is that it avoids heavy upfront investment and the waiting times that ordering a new build would involve. This in turn also lowers the risk as the carrier has the flexibility to alter or even cease the service if subsequent developments are not in accordance with their business plans. When markets are stagnant and the demand-supply imbalance is severe, Carriers have the option of returning the chartered vessel (subject of course to clauses relating to minimum lock-in period or financial compensation, as may be incorporated in the charter agreement).

The operational and commercial flexibility thus afforded by chartering vessels can prove invaluable to medium and small-sized companies, who often might not have excess resources and are rigorously focussed on OPEX control and cash flows. Such companies also lack the scale and geographical presence to redeploy the vessel on alternate routes/ trade lanes, wherefore returning the chartered vessel would be the only viable alternative.

The advantages of chartering are:

1) Investment-light strategy, involving minimal CAPEX
2) Vessel can be deployed into service immediately, thus avoiding the lag time involved in the constructing of new vessels (which can range between 2 to 3 years, depending on the size and design, besides the existing order book of the shipyard).
3) Carrier has the option of returning the vessel in case of a downturn in the market,
4) Carrier can avoid straining its balance sheet or excessive leveraging levels – thus improving its financial health
5) Generally (prior to the Covid induced bull run), charter rates have been quite reasonable, and Carriers could get good charter terms.

The disadvantages of chartering are:

1) Lesser operational control over the service/ deployment (that owning the vessel would have otherwise provided)
2) Higher regular cash outflow towards disbursing charter rates
3) Potential disputes regarding maintenance of vessels and defraying miscellaneous expenses
4) Risk of potential disruptions in service, in case charter is not renewed, for whatever reason
5) In case of a bull market, it will be difficult to find appropriate tonnage to charter, leaving the Carriers unable to deploy adequate capacity, resulting in revenue losses and missing the chance of taking advantage of cyclical upturns.