Just as you would lock the door to your house to safeguard your personal belongings, maritime containers also need to be secured and locked to prevent pilferage and tampering of the goods within, while on its way to its destination.

Container seals are ‘one-time door locks’ used to secure goods containers. Each seal-lock can be used only once. Heavy-duty container seals are designed to withstand natural elements and last the entire voyage of the container until it is removed by the customer at the destination.

The duration of a container’s journey from the consignor’s warehouse to the consignee could be anywhere between two days to a few months! Delays can happen due to wrong documentation, port and labour union strikes, break-down of transport vessel, etc.

Before removing the container seal, the customer has to ensure that it is intact and has not been tampered with.

Container seals are of different types. They come in a variety of shapes, sizes, and price range. Each seal has a unique alphanumeric identification number that is used to confirm that it has not been changed during the container’s voyage.

However, care has to be taken while noting seal numbers as different types of seals may carry the same seal number, though this can happen only very rarely.

The Bill of lading includes the container seal number for verification by port authorities, port customs and the customer receiving the cargo. 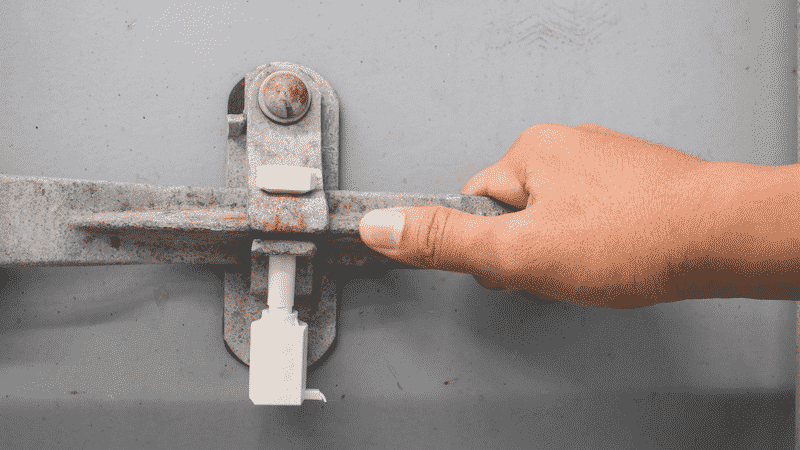 The Need for Container Seals
Container seals are used to secure the container doors once the loading of cargo is completed. In certain cases, empty containers are locked and sealed before being sent for stuffing. This is done to prevent tampering and maintain container cleanliness or a set-temperature, as in the case of containers meant for loading of certain high-value products, highly perishable food items, or medicines.

It is a requirement by ports, government regulators, and importers/exporters that all FCL (Full Container Load) and LCL (Less than Container Load) containers are sealed during transport.

With the manifold increase in global trade, container movement between points of trade has increased drastically in recent times. An equally large number of empty containers are required to be moved between these trade points to meet demand.

Containers are used to transport different types of cargo based on temperature requirements such as dry, chill, or frozen. The cargo-types can be classified further as perishable, non-perishable, medical drugs, etc.

Depending on the type of consignment, the consignor/consignee or person sending/receiving the goods may decide to use a specific mode of transport and in a specific type of container.

These containers change hands at several points from the moment it leaves its storage location. For example, the stuffed cargo is taken to the port from where it is due for sailing. It then passes hands to the shipping vessel in which it sets sail to its destination. It may then stop at trans-shipment ports. At its final destination, it is unloaded and transported to the consignee’s address or warehouse.

It is therefore important that the cargo remains safe during its journey until it reaches its final offloading point, which is the warehouse of the consignee or person receiving the goods.

Even though security and features such as CCTV surveillance in warehouses, container yards, and even ships, help to deter those who indulge in criminal activities, the danger posed by smugglers, counterfeiters, human traffickers, drug traffickers, or exploitation by terrorists is still large.

It cannot be discounted in the case of cargo containers, whether empty or full. While shipping empty containers, some shipping lines stack them back-to-back.

In this method of stacking, the door side of any two containers is placed facing each other so that they cannot be opened during transit. 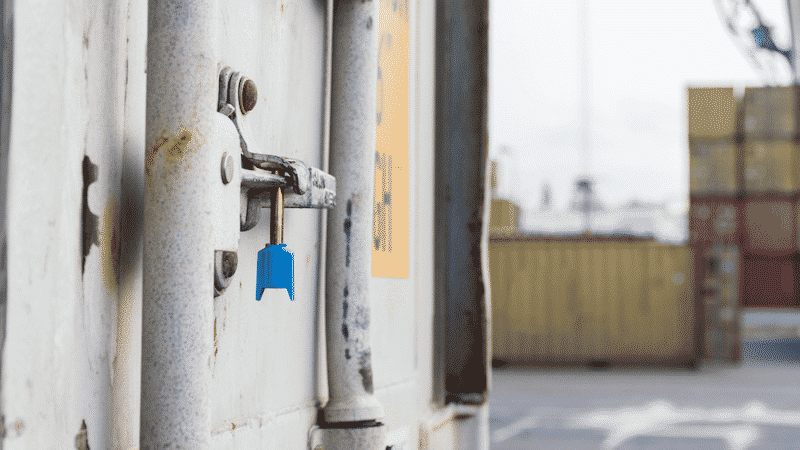 Of these, the safest and the most commonly used is the bolt seal. It consists of a metal pin that is driven into a plastic-coated steel barrel, forming a one-time lock and tamper-proof seal.

Bolt seals are made of heavy-duty steel, coated in tough weather-resistant, anti-corrosive plastic. A unique seal number is shown on both the pin as well as the barrel of the seal.

E-seals that are read-write capable usually contain basic data about the container and can be read using Radio Frequency Identification (RFID) readers.

RFID technology is used to collect data from the computer chip that is embedded in the seal. The power to read data from these seals is taken from the radio frequency transmitted by the RFID readers.

Those with their own power source and transmitter are also available. These seals can accommodate more data but are slightly more expensive. One drawback of the RFID e-seals is that data can be read-only at points where there are RFID readers.

Closing the Container Doors
A normal sea container made of Corten Steel (a kind of weather-resistant, heavy-duty steel) has two doors, each having two lock-rods. These lock-rods run vertically, from the top to the bottom of the container, and helps to lock the doors in place.

Separate handles attached to these lock-rods have small catches that have holes through which the seal is fixed to anchors on the container doors. The door on the left-hand side is closed first followed by the one on the right.

Fixing the Container Seal
A bolt seal comes as a single unit with its unique number embossed or laser-printed on both the pin as well as the barrel. It is considered good practice to check that the numbers match between the two, before fixing the seal.

The barrel is first separated from the pin by snapping the plastic connector between the two. It can then be easily fixed by pressing the open end of the pin firmly through the appropriate openings in the lock-rod, into the sealed barrel. 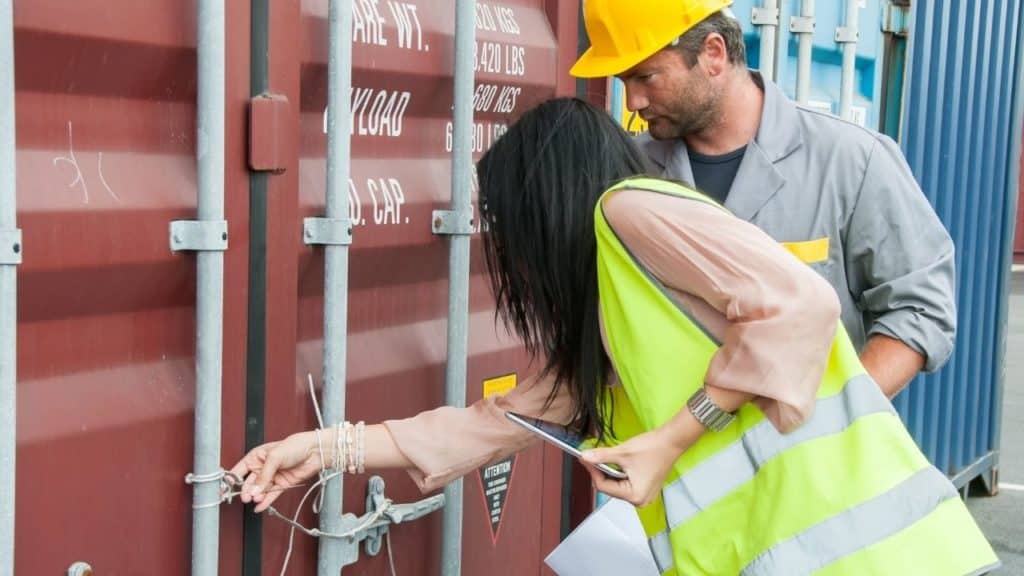 You can hear a soft click as it locks itself into place. Experienced warehouse-hands and container handlers ensure that the seal is firmly in place by trying it with their hands. Once locked, the only way to open the container seal is to cut the pin with a seal or bolt cutter.

Some consignors send pictures of the locked seal to the consignee, affixed with the date and time stamp. Such pictures come in handy in the event of loss or damage to cargo as they help surveyors and insurance companies to decide on the veracity of a claim.

Port and Customs requirements
Generally, Port and Customs authorities around the world insist on at least a single seal on a container – as long as it is fixed in the appropriate hole of the lock-rod on the door to the right. However, it is left to the discretion of the shipper on the number of seals that are used to seal a container.

The maximum number possible is six, as container door lock-rods have at a maximum, only six openings through which you can put container seals.

In recent times, drug smugglers have time and again resorted to smuggling drugs through normal supply chains, such as a sea consignment. With strong financial backing, international criminal organizations find newer and better ways to smuggle drugs in containers.

Latin American countries like Columbia, Peru, and Bolivia are the major producers of drugs like cocaine. From these countries, the drugs find their way to the US, Europe, and Asia. Similarly, drugs from Asian countries also reach these countries. Smugglers often ship drugs under the guise of legitimate cargo.

As one of the ways to deter this, Port and Customs officials across the world carry out random checks on shipping containers. For gaining access to the container and to carry out their inspection, they will have to cut open the container seal affixed by the shipper. 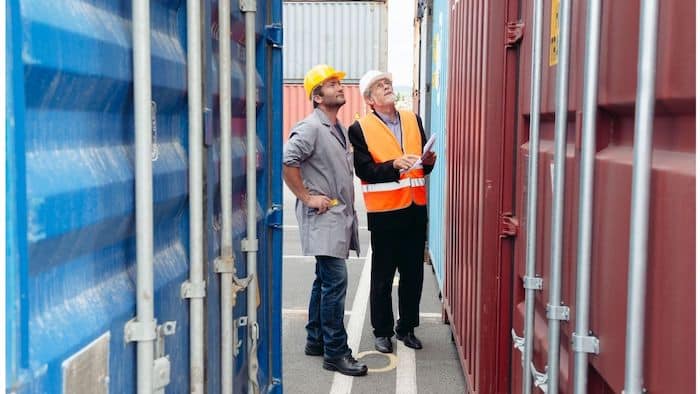 However, in such instances, a new Customs seal will be fixed. Random checks on containers are usually done by the Port Customs to ensure that goods carried in them are as per what has originally been declared to the Customs department.

Removing the Container Seal
It is usual practice to check the container seal for signs of tampering before the customer receives the container. When the metal bolt of the seal shows signs of having been cut, or if the barrel is out-of-shape, or has crimp marks signifying that a heavy tool has been used to remove it, the customer has to immediately notify the cargo handler as well as the concerned insurance company. The container will then be opened only in the presence of representatives of these parties.

To prevent erasing or removal of the seal number from the container seal, it is marked using different techniques such as thermal printing, laser engraving, etc.

Any mismatch among the numbers should be immediately brought to the notice of the shipping line. In such instances, the cargo handler’s representative, the insurance surveyor, and the consignee’s representative will conduct a joint survey to ascertain the cause and establish that the contents of the container have not been tampered with.

Container seals are removed using a heavy-duty metal seal or bolt cutters. The only way a container seal can be removed is by cutting it. This ensures that there is no scope for opening and refitting.

The seal should be cut along its length, which is the pin of the seal. Some consignees retain the seals that have been cut and removed until the cargo is confirmed as mentioned in the manifest and that there is no longer a need to lodge any claim, whatsoever, with the shipper.

Standard for Container Seals
The prescribed standard for container seals that is recognized worldwide is the ISO 17712:2013. It classifies and lays down standards for all mechanical seals that are used to seal freight containers.

Certain countries like the USA require all their inbound containers to be sealed with ‘High-security’ ISO certified seals. Similarly, other countries may have container seal requirements to satisfy security standards followed by them.

An interesting fact is that container seals that conform to ISO 17712:2013 can be used for the transfer of cargo by containers through other modes of transport such as by rail or by road.

The CTPAT is a joint government-public-private sector program that works towards improving security in supply chains and global trade.

It consists of most of the major companies in the US, carriers, cargo consolidators, and manufacturers, including several major security seal manufacturers of the world.

These stakeholders help the CTPAT to identify gaps, improve best practices and safety measures that help to fight terrorism.

CTPAT can suspend a member such as a carrier or cargo consolidator when it is found that they have breached the laid-down security protocols. This suspension is withdrawn only after such members address the breaches, introduce better and stronger security procedures, and prove to the CTPAT that all issues are addressed.

A tampered, broken, or replaced container seal (except as in the case of Port Customs inspection) is evidence that the container has been opened on its way to its final destination. The consignee can then take appropriate action for claiming insurance or compensation.