When the Japanese registered Hakone Maru set sail for the first time from Japan on August 27, 1968, on its voyage to Oakland, United States it was a giant step in maritime cargo transportation – especially the transportation of standardized box containers. On its maiden voyage, it carried 752 twenty-foot shipping containers (TEUs).

Corrugated steel containers for cargo transport developed by the American entrepreneur Malcolm Maclean in 1955 were already popular by then.

Today, containerization and transport of cargo by container ships are the two most common methods of moving goods between locations. Intermodal containers that can be transported and shifted easily between the three modes of transport – sea, rail, or land account for transporting roughly 85% of the global cargo.

Dedicated shipping containers are used for the transport of general cargo and cargo that is temperature-sensitive.

The International Maritime Organization (IMO) introduced standardization of containers in the late 1960s’ aimed at bringing consistency in the loading, unloading, and transportation of such containers. The container handling equipment used in ports and warehouses, as well as related facilities adapted to these changes as well.

Currently, the most commonly used container sizes are the TEU and the FEU (Forty-foot Equivalent Units). These containers are available as general or temperature-controlled containers, depending on the customer’s needs. Such standardized cargo containers have maintained their general features by and large until recently. While containers laden with goods criss-cross the oceans on freight vessels and are transported by different modes of land transport to their destinations, the logistics of returning empty containers after unloading their cargo, to their origin, is often not given a thought.

Only when the empty containers are returned and made available at their origin can they be used to fulfill customer demand effectively. Empty containers account for a major part of global container traffic.

An estimated 40% of containers in circulation around the world are said to be empties. From time to time, empty containers clog up the world’s ports and container yards causing container shortages and an increase in freight rates at other locations.

They have to be then moved to those locations where there is demand. The movement of empty containers is a costly affair – monetarily as well as ecologically when CO2 emissions from transport and industries are at an all-time high.

The cost aspect associated with the movement of empty containers is one main reason why there is often an unhealthy lag in moving these. It is an unproductive cost unless suitable return cargo can be found to take in these containers. Is there an economical and environmentally safe way to overcome this situation?

Business establishments and freight and transport operators got so used to rigid shipping box containers that foldable containers never came to light until about 2008.

Imagine flat-packing your empty shipping containers and stacking them when not in use or during transportation. Think of the enormous space-saving possibilities when empty containers are stored this way. Space requirements of warehousing and logistics operators will reduce drastically, and so will container handling costs.

Holland Container Innovations (HCI) a company based out of The Netherlands, came out with the concept of foldable containers in 2008. Further to research and trials, in 2013 it developed a foldable or collapsible container that was certified by both the ISO (International Organization for Standardization) and the CSC (Container Safety Convention 1972). This container is called the 4FOLD.

HCI claims an amazing 75% saving in space as four 4FOLD containers, when stacked, take only the space of a single conventional rigid container. This would mean less cost on transportation of empty containers, their storage, and other associated costs. Certain other studies have put savings at 50 – 60% though these figures vary according to different studies. 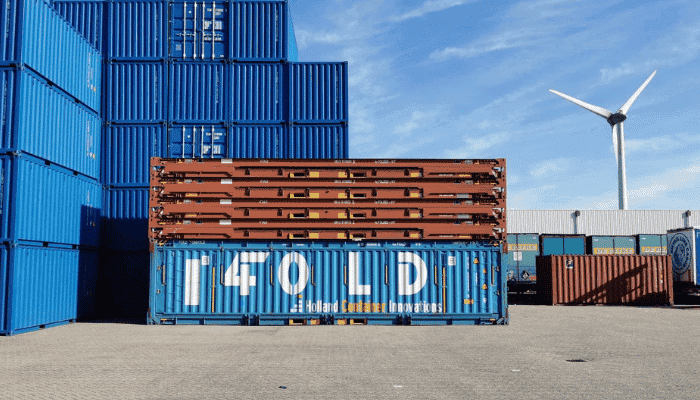 Besides creating more shipping space, we can see here that it has its own environmental benefits by way of less emissions from transport and Material Handling Equipment (MHE). HCI claims that CO2 emissions are brought down by 37% as a result of using their foldable containers.

Folding and unfolding of such containers take only ten minutes and four folded containers are connected or ‘bundled’ together to form a single unit. These bundled single units are then handled like a single container using normal MHE.

Besides the ISO and CSC certifications, 4FOLD is certified by several other reputed registers such as the Lloyds Register (LR), American Bureau of Shipping (ABS), the Korean Register (KR), etc.

Currently, the company is calling upon organizations, shipping lines, and transporters to use their foldable containers and take advantage of their benefits. HCI won the Global Innovation Award recognizing sustainability instituted by DP World in 2021.

Staxxon is another company that is coming out with foldable containers. This year, the US-based company operating out of New Jersey began trials of their foldable containers collaborating with freight vessels, road transport operators, and railcar companies.

How Does a Foldable Container Work?

While the containers from HCI are of the collapsible type, those from Staxxon fold vertically, in the company’s words ‘accordion style’.

To fold an HCI container, an MHE would lift the roof of the container, and then the sides are folded inward. The roof is then lowered gently to rest on the folded sides creating a kind of horizontal flat-pack. Four folded HCI containers are placed on top of one another to form a single standard container size for storage or transportation.

A Staxxon foldable container is folded like an ‘accordion’ vertically. In other words, it is ‘compressed’ from side to side to form a vertical, much flatter unit. Such foldable containers are compatible with the normal ISO-approved TEU or FEU and are strong enough to be placed anywhere on a shipboard stack. Any number of containers from 2 to 5, can be folded and stacked in such a way to form a regular container size for transport or storage. While the 4FOLD is already in circulation, Staxxon is expected to initially come out with 20’ and 40’ container sizes, with the same payload capabilities.

The tare weight of foldable containers might be slightly on the higher side considering the folding joints and other extra features. Depending on their usability and success we can expect more standard sizes from the manufacturers in the near future.

The Downside of Foldable Containers

Foldable containers are expected to cost more than normal ones. Some shipping experts say that it is also susceptible to damage more easily than its rigid counterparts and therefore its lifespan will be much less.

Considering the millions of conventional shipping containers that are in circulation today, replacing them with the foldable option will be a daunting task. And then, what to do with the containers that have to be replaced?

Currently, the post-pandemic surge in freight cost and non-availability of containers is easing up a bit. Several thousands of empty containers that were lying in European and American ports have started moving and the global imbalance in container placements is said to be getting better, bringing down global freight costs with it.

Reduced freight costs, the increased upfront cost of foldable containers, and questions on their durability are bound to bring hesitancy to the mind of customers.

Innovators and manufacturers of such containers are surely bound to come up with solutions to address these perceived problems. Nevertheless, foldable containers are an exciting option to combat the increasing global space crunch and cut down on environmental pollution.