What Is Break Bulk Cargo?

Trading centres of the world are separated by vast distances but globalization has brought them closer. Communication is almost instantaneous such as by phones, emails, and video calls. While this may be the case, goods still have to travel the distance between the seller and buyer.

Modern transport equipped with the latest technologies is a far cry from the horse-drawn carts, steam locomotives, and steamships of the past. Transport, as well as the equipment used in the handling of cargo, are bigger, much faster, and more efficient these days.

Even as you read this, more carriers with increased container-carrying capacities are getting readied in the world’s largest ship-building yards.

But can businesses across the world rely only on intermodal containers to transport their goods? 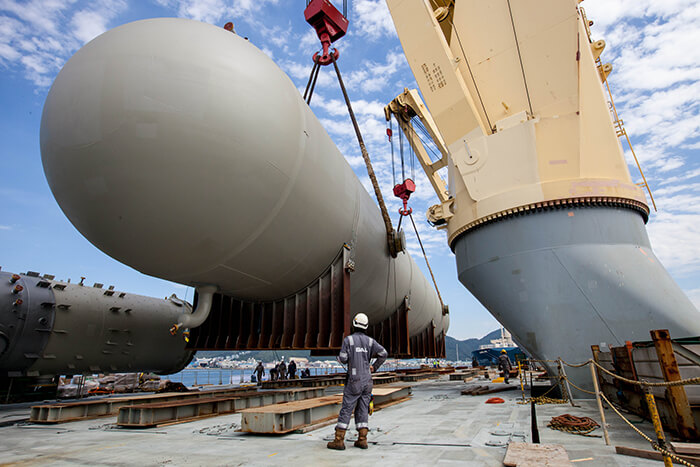 Grains, minerals, oil, etc. that need to be transported in large quantities are examples of goods that are often transported otherwise. They are stored as smaller units in the holds of a ship or on the storage areas on the deck. Such a consignment is called break bulk cargo.

A bill of lading of a break bulk consignment would normally show the commodity and its total volume or weight. The smaller units in which they are packed might be as bags, crates, barrels, pallets, etc.

Break bulk cargo is packed in smaller units for the ease of loading and unloading using cranes, conveyors, forklifts, or even by hand.

Cargo that is transported as break bulk is moved from land to a ship or vice versa by the above means, unlike a container that is pre-packed, sealed, and lifted from the quay onto the ship (or ship to the quay). Containers are loaded by gantry cranes that can lift such heavy loads.

Minerals, ores, oils, and gases are also transported loose. In such cases, they may be stored in large silos, containers, or special holds built on large ships.

Bags
Break bulk cargoes of grains, coffee, cement, etc. may be packed in bags of a standard size such as 25 or 50 KG bags. In such cases, to prevent damage to the goods caused by seawater or moisture, the bags are made of special water-proof and weather-proof materials.

Crates and Corrugated Boxes
Crates help to transport certain types of goods as break bulk. They may be made of wood or plastic. Crates help to stack the cargo while protecting what is inside. Goods that are commonly transported in crates or corrugated boxes as break bulk are machines and machine parts, fruits, etc.

Corrugated boxes are usually made of cardboard or fiberboard but are quite sturdy. There are different grades of such boxes that are resistant to moisture and other inclement weather conditions. Care should be exercised while stacking corrugated boxes and not exceeding the prescribed limit for stacking.

Mostly, crates and corrugated boxes are palletized for transport to make the loads stable and for ease of loading.

Barrels and Drums
Barrels and Drums are used in the transport of liquid cargoes such as oils and associated products. Whiskies and certain other alcoholic drinks are also sometimes transported in barrels or wooden casks. Drums are made of metal and can be stored upright or on their sides.

Pallets
Pallets are either made of wood or plastic and come in different sizes. The widely recognized ones are the standard pallet and the euro pallet. The former measures 48” X 40” while the latter is 47.24” X 39.37”. Goods can be stacked and secured on such pallets for ease of loading and storage onboard a ship.

Loading of Break Bulk Cargo
Break bulk cargo is usually delivered to the quay by trucks or cargo trains and loaded directly onto a ship. In some cases, it is brought and stored in the port warehouse before a ship’s ETA (Estimated Time of Arrival).

When the ship arrives and it is ready for loading, these goods are moved to the ship. This is usually done when there is a large number of goods for loading and it has to be brought in several batches. Port warehouse storage is opted by shippers when goods have to be brought in from different locations.

The ship’s holds or the storage areas have to be washed, cleaned, and dried before receiving a break bulk load.

Unloading of Break Bulk Cargo
When a ship arrives at the port with its load of break bulk cargo, it is offloaded directly onto trucks or train wagons and taken to its destination. In certain cases, it may be offloaded and stored at the port warehouse from where it is taken by the consignee at a later point in time. This is often done when the consignee does not have a warehouse to store the goods.

Besides, port warehouse storage charges are usually lower than those of private warehouses outside the port area. Once unloading is complete, a ship’s stowage area is cleaned of all traces of the cargo that it had carried, washed, and dried before it is ready to receive the next load.

Break Bulk V Containerization
Availability of labour is a critical factor in the handling of break bulk cargo offering employment to many. This manual method of loading and unloading requires only the minimum shore facilities such as cranes and other equipment. Transfer of goods from ships to smaller feeder vessels is easier when it is break bulk.

Break bulk cargo used to be the only method of transporting cargo until the invention of the modern shipping container.

The multi-modal shipping container revolutionized the transport industry in the 1960s. Besides bringing about a drastic reduction in shipping costs, it made the movement of goods between different locations easy and safe. Containerization reduced handling damages and pilferage of goods.

Supertankers and carriers can carry liquids, gases, and grains in their large and specially constructed holds.

Innovations in packing and transport along with the above reasons are perhaps behind the steady decrease in the volume of cargo that is moved as breakbulk these days.