What Is A Cargo Manifest In Shipping?

A cargo manifest is a consolidated list of all the cargo that is on board a cargo vessel. The list of all cargo carried on the vessel will appear under the vessel name and identification marks of the vessel.

It would also show the route taken by the vessel. A manifest, in general, is a complete list of the cargo or passengers. Just like the cargo manifest, the passenger manifest lists details of all the passengers who are onboard a ship or airplane. This list would include details of the crew members as well.

Typically, a cargo manifest would list all the bills of ladings along with the above details and the total number of goods being transported shown per bill of lading. However, the individual bills of ladings will be attached to this cover sheet.

We can see how the cargo manifest works in this example given below.

Customer A in Djibouti buys 1000 gensets from company B in Kolkata, India. Company B ships these gensets by a cargo vessel. The vessel carries other electrical goods and consumer durables meant for customers en route and in Djibouti.

The cargo manifest of the ship will show the 1000 gensets purchased by customer A as well as the other electrical goods and consumer durables that are shipped on the vessel for the other customers.

Customs authorities at the respective ports will need to review and confirm the cargo manifest against the actual cargo being unloaded at these destinations.

As we can see in this example, the cargo manifest is a very important document for the shipment of goods without which goods cannot be unloaded at their destination ports or loaded from their load ports. 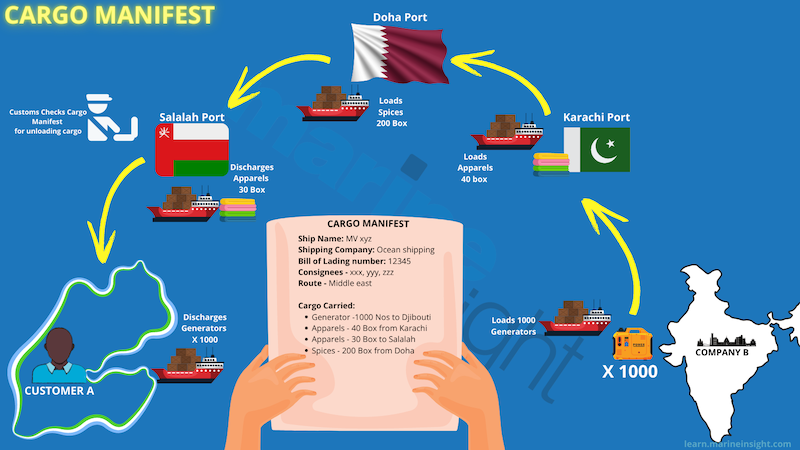 Typical Contents of a Cargo Manifest

Who Uses the Cargo Manifest and Why?

Answerable to the captain of the vessel, his duties may sometimes include the safety of the vessel and its sailors/passengers.

The typical cargo manifest lists all the goods that are on the ship though it may be meant for several different destinations. The details that it contains include the item name, quantity and weight of the item, type of item, the name and address of the consignor, and the name and address of the consignee that each item is headed to at the destination port.

In most cases, the cost of each item is also shown. The list is prepared according to the bills of ladings and the goods loaded from each port of call.

It is a convenient tick-list for the cargo vessel’s first mate or chief officer as each consignment is offloaded at their destination ports.

While the cargo manifest shows the name of the item, quantity and weight of each item, type of the item, and the name and address of the consignor and consignee, the freight manifest will also show the freight charges for each consignment on board the vessel. This is done for the collection of freight charges from the consignor at the port of origin or the consignee of the shipment from the port of discharge. The freight manifest may also be used for the calculation of freight commission, etc.

The IMDG code is a set of directives for the shipping of dangerous goods by a transport vessel. It is issued by the International Maritime Organization (IMO) and updated once every two years. When hazardous materials are packed, the shipper has the responsibility of following the IMDG codes in packing that ensure its safety during the transport.

MFAG is a guide that is published by the World Health Organization (WHO) for handling accidents that involve dangerous goods, especially chemicals. It lists safety measures, first aid, and emergency procedures that are to be followed in the case of an accident where dangerous chemicals are involved. 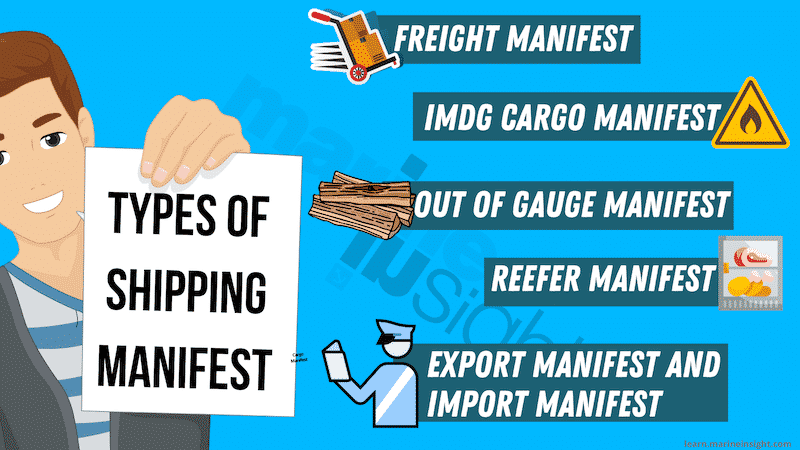 While onboard the cargo vessel, hazardous materials will follow a separate cargo stowage plan and handling instructions.

A reefer or a refrigerated container is a shipping container that is used to transport cargo that is sensitive to extreme temperatures and temperature fluctuations.

Such cargo may consist of food items, pharmaceutical drugs, or sensitive electronic equipment that have to be stored and transported at specific temperatures and humidity levels.

A reefer normally operates using an internal refrigeration system or a genset. However, they may require external power during transportation over long distances.

A reefer manifest will have all the details of the refrigerated containers that are onboard the vessel for delivery to the different consignees at different destinations. The details would include the temperature settings, humidity settings, and other such requirements of the reefer containers onboard.

Out of Gauge Manifest

What is an Out of Gauge (OOG) cargo? An out of gauge cargo is cargo that cannot be packed in a box or does not conform to a square or rectangular packing. Also known as OOG cargo or AIL (Abnormal Indivisible Loads) such cargo may be abnormally shaped, sized, or have protrusions that require special packing and stacking requirements whether at storage or on the vessel. They do not fit into the normal shipping containers.

An out of gauge manifest will show the details of such cargo including its dimensions, weights, etc.

Examples for out of gauge cargo are blades of wind turbines, construction machinery, automobile trailers, etc.

Most of the port customs of the world are strict about the submission of cargo manifests. Failure to abide by the requirements may result in goods not being allowed to be loaded on the vessel or offloaded from it.

The cargo documentation can be said to be complete once the final cargo manifest is uploaded on the ocean carrier’s computer system. To avoid further changes to the cargo manifest, the vessel’s cargo system is locked after a certain period from the time of setting sail from the port of loading.

Can the Cargo Manifest be Changed?

Shipping companies have the occasional customer who wants to change some details of his shipped cargo. However, can this be done? What are the implications?

Port customs around the world are generally strict about making changes to the cargo manifest. This is because changes to certain details would call for changes to customs duties, etc.

Hence, changes to quantities, type of goods, HS codes, rates, etc. are usually not allowed. Customs authorities in certain ports impose a fine on corrections that can be made. There are also set deadlines after which changes are not allowed.

The port customs of countries like the United States, Canada, Japan, China, etc. require the manifest of a vessel to be submitted through the Automated Manifest System (AMS). Details of cargo carried on a vessel are required to be entered and uploaded in the AMS within the time-frames set by the authorities.

With increased vigilance for preventing terrorism, drug-smuggling, and other unlawful activities authorities impose large fines when the rules for submission of a vessel’s cargo manifest to the AMS are not followed.

Sometimes shippers do not show the correct quantities of their cargo for escaping customs fees or charges. Failure to follow the rules or in maintaining the accuracy of cargo records can also result in the seizure of the cargo.

In exports and imports, it is mandatory to submit the manifests through proper channels such as the Automated Manifest System or otherwise, following the proper time-frames set by the authorities.

More and more countries have resorted to digitalizing maritime transactions to prevent fraud and manipulations. These days, evolving and fail-safe technologies help to monitor and record such transactions.

Cargo Manifest and Bill of Lading

A bill of lading is an acknowledgement by the carrier for the receipt of cargo onboard their vessel whereby it undertakes to transport it from point A to point B. Bill of ladings may be negotiable or non-negotiable.